I love making fancy drinks and photographing them for Instagram, so I’m always on the lookout for pretty barware. I’d been wanting a copper Moscow Mule mug for a while, but I’m also too cheap to pay more than $10 for one. Recently, on a trip to Goodwill, I spied a badly tarnished Moscow Mule mug – and it was only 69 cents! I bought it, fairly confident that I could use Bar Keepers Friend Soft Cleanser to restore it to its former beauty. I was right.

I’ve seen a lot of Bar Keepers Friend before-and-after photos on Instagram, and I realized I had the opportunity to create my own – I snapped a picture of the filthy new-to-me mug and prepared for Operation Moscow Mule.

I donned some kitchen gloves, and over the sink, doused the mug inside and out with BKF soft cleanser, using a wet sponge to spread it evenly across the surface of the copper mug. After about a minute, I rinsed the mug and patted it dry. I repeated this process three times to remove all the tarnish, and once it was clean, I buffed it with a lint-free bar towel to bring out the shine.

I buy most of my barware at Goodwill, and when I find something special, I do some Googling to see if I can find out where it came from. I Googled “Moscow Mule mug brass handle” and found an image match – the mug, which has a nickel lining and brass handle, retails for about $20. Someone got rid of this lovely mug because it was grimy. Hooray for me!

A Moscow Mule contains just three ingredients – vodka, lime juice, and ginger beer – but I’d never made one (because I didn’t have a proper mug). I like to put my own spin on traditional cocktail recipes, and this mug seemed like it deserved a fancier version of a Moscow Mule.

I often make ginger simple syrup to use in cocktails or in sparkling water – ginger ale and ginger beer are just too sweet for me, and not zesty enough. So I decided to use ginger syrup in my fancy cocktail, along with cranberry simple syrup and fresh mint. The flavors combined beautifully with the lime juice, and the result was refreshing and aromatic. (You can see the full recipe below).

The Moscow Mule has several origin stories, and the one consistent thread throughout them is that the drink was part of a late-1940s marketing stunt – the owner of a vodka distillery needed a way to unload excess inventory, so he (perhaps with the help of others) came up with the Moscow Mule, served in a copper mug. Allegedly, the crafty distillery owner bought a Polaroid camera (invented in 1947), and snapped pictures of Moscow Mules at various bars, so he could convince people they were trending. In other words, he was Instagramming before the internet even existed.

A Tradition of Excellence

Bar Keepers Friend has its own interesting origin story. In 1882, a chemist preparing a pot of rhubarb for dinner found that when he emptied the pot, it looked sparkling clean. He subsequently discovered that rhubarb contains oxalic acid and that oxalic acid naturally destroys rust stains, tarnish, and lime deposits. He then created a powdered cleanser containing oxalic acid and sold it to taverns as a brass rail polish – that was the debut of Bar Keepers Friend.

Today, Bar Keepers Friend makes a variety of cleaning products for use throughout the home, and loyal customers love sharing before-and-after photos that showcase the power of BKF cleaners. I had never tried to restore a neglected copper mug, but now that I have, I can see why BKF’s motto is, “Once Tried, Always Used.” 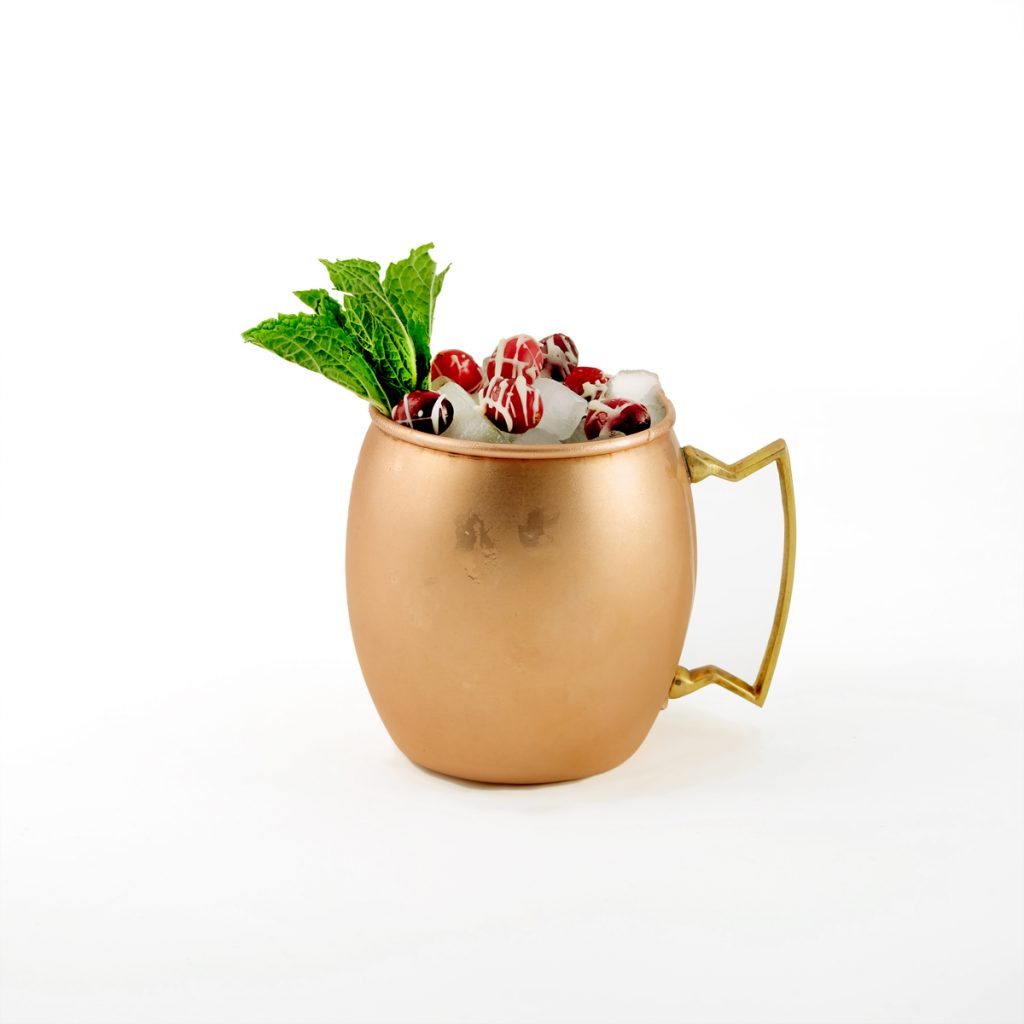 In a mixing glass, muddle mint and lime juice. Add other ingredients and ice. Stir until cold. Strain into a copper mug over fresh ice and add fresh mint and chocolate-drizzled cranberries.

Combine ingredients in a medium saucepan over medium-high heat, and stir until sugar dissolves. Using a slotted spoon, carefully remove ½ cup cranberries and set aside (for garnish). Reduce heat and simmer until remaining cranberries start to burst, then remove from heat and allow mixture to cool before pouring through a mesh strainer into a glass container. Seal container and store simple syrup in the refrigerator for up to one week (combine it with sparkling water for a refreshing soda).

Combine ingredients in a medium saucepan over medium-high heat, and stir until sugar dissolves. Reduce heat and simmer for 30 minutes. Allow mixture to cool before pouring through a mesh strainer into a glass container. Seal container and store simple syrup in the refrigerator for up to one week (combine it with lime juice and sparkling water for a refreshing soda).

Pat-dry cranberries and spread evenly on parchment paper. In a double boiler over low heat, slowly heat chocolate pieces, stirring frequently. When chocolate is melted and looks shiny, use a teaspoon to drizzle chocolate over cranberries. Allow cranberries to cool in refrigerator before garnishing your Mule-jito (you’ll have extra cranberries, for snacking).

Jenny Henderson is a content specialist for BoxCrush, a digital marketing agency in Indianapolis. She enjoys making and photographing cocktails – and sharing her photos on Instagram as @megangarnishes

Get the BKF Newsletter
×

Get the BKF Newsletter

Where to Buy BKF